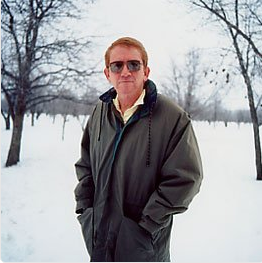 Timothy Murphy, formalist poet of the heart, will be long remembered for his inimitable style and formal mastery, the sheer volume and energy of his creative output, his contributions to the poetry community, his love of hunting and of the land, his open attitude about being both gay and conservative, and his strongly-felt re-conversion to Catholicism in his later years. One can’t easily sum up a life really, but this thoughtful review of his most recent poetry collection, Devotions (North Dakota University Press), helps. As does this obituary. And maybe the best of all is this interview, where Murphy talks about the moment, quite a miraculous one at that, when everything changed. Inspiring, no matter what your point of view on faith or politics. Beyond that, let his poetry speak:

The night you died, I dreamed you came to camp
to hear confession from an Eagle Scout
tortured by forty years of sin and doubt.
You whispered vespers by a hissing lamp.

Handlers, allowing you to hike with me,
followed us to the Bad Axe waterfront
down a ﬁrebreak this camper used to hunt.
Through all I said you suffered silently.

I blamed the authors of my unbelief:
St. Paul, who would have deemed my love obscene,
the Jesuit who raped me as a teen,
the altar boy when I was six, the grief

of a child chucked from Eden, left for dead
by Peter’s Church and all the choirs above.
In a thick Polish accent choked with love,
Te Dominus amat was all you said.

**************
(Notes:
Pope John Paul II died on April 2, 2005, and that night he visited me in a dream. This dream recurred three times. The last time was April 15, 2007—the night Pope Benedict XVI accosted American bishops over the matter of clerical sexual abuse—when this poem came to me in its entirety. I rose and immediately typed it. In every instance the dream was identical, and John Paul’s words were the same. Te Dominus amat is Latin for “God loves you.”— TM)
*******************

”Mizar” and “Alcor” in Winter

Cirrus dispersed. As a black night grew colder,
clearer, I spied the binary in the handle
of the Big Dipper dangling above my shoulder,
a pinprick twinkling by a blinding candle.

Absent the moon, its boreal corona,
I watched the stars rise east of Ellendale,
Guelph and Ludden, then wheel above Verona
and sleeping friends who farm near Englevale.

A thousand miles of road: I’d shunned the pavement
which bears the burdens I no longer ferry,
the cargo of material enslavement.
Six eagles hunted small game on the prairie.

An Arab prince’s fortunes once were measured
by blooded foals, by sons his wives could dandle,
by tributary quatrains to be treasured
and his eyesight: a pinprick by a candle.

On this 4th of July, aka Independence Day, we think — hopefully — about freedom, which should mean, on this of all holidays, freedom from oppression, tyranny, freedom of speech, religion, and the press, freedom which comes from the rule of law, which does NOT mean “law and order” or “police state,” as Trump would have it, but rather means NO ONE is above the law, certainly not the president or any of his cabinet, certainly not members of Congress or the judiciary, all of whom are public servants. With a president who has never acknowledged publicly that he too is subject to the law, who taunts the freedoms made part of the Constitution in the First Amendment to the Bill of Rights, promoting only the second amendment, which he thinks means everyone must be armed with assault weapons, or at least be able to exercise their “right” to wield such weapons. But then, the history of America has always had its overbearing side.

And no one has expressed this more eloquently than Alicia Ostriker in her breathtaking poem “The History of America.” If America has national treasures, Ms. Ostriker is certainly one of them, having written a lifetime of enduring poetry on the most vital subjects of our time.

The History of America

A linear projection: a route. It crosses
The ocean in many ships. Arriving in the new
Land, it cuts through and down forests and it
Keeps moving. Terrain: Rock, weaponry.
Dark trees, mastery. Grass, to yield. Earth,
Reproachful. Fox, bear, coon, wildcat
Prowl gloomily, it kills them, it skins them,
Its language alters, no account varmint, its
Teeth set, nothing defeats its obsession, it becomes
A snake in the reedy river. Spits and prays,
Keeps moving. Behind it, a steel track. Cold,
Permanent. Not permanent. It will decay. This
Does not matter, it does not actually care,
Murdering the buffalo, driving the laggard regiments,
The caring was a necessary myth, an eagle like
A speck in heaven dives. The line believes
That the entire wrinkled mountain range is the
Eagle’s nest, and everything tumbles in place.
It buries its balls at Wounded Knee, it rushes
Gold, it gambles. It buys plastics. Another
Ocean stops it. Soon, soon, up by its roots,
Severed, irrecoverably torn, that does not matter,
It decides, perpendicular from here: escape.

A prior circle: a mouth. It is nowhere,
Everywhere, swollen, warm. Expanding and contracting
It absorbs and projects children, jungles,
Black shoes, pennies, blood. It speaks
Too many dark, suffering languages. Reaching a hand
Toward its throat, you disappear entirely. No
Wonder you fear this bleeding pulse, no wonder.

My sonnet “Love Is Hell” is now up at Better than Starbucks (scroll down the page for my poem), an online zine for poetry, fiction, nonfiction, reviews, and more, where you’ll find separate sections for each genre and style, including formal poetry (such as sonnets and villanelles), free verse, haiku and Japanese forms, and light verse, as well as fiction, etc., so you can freely browse or zero in on what interests you. The section for “interviews” has an imaginative interview with William Blake, attended by Blake’s wife. Much worth your time on this site! Please check it out.